Faculty Recital: Jamey Haddad and "Under One Sun" 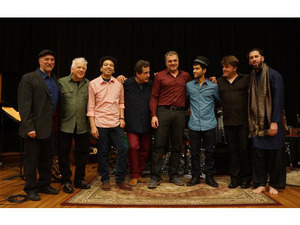 While celebrating Middle-Eastern percussion, South Indian forms and Venezuelan folkloric styles, this group’s heart remains in the jazz world. Lifelong music performance partners Billy Drewes and Jamey Haddad have been sharing the stage for over 40 years and have now assembled a group of their favorite players to perform in Oberlin, at Cleveland's BOP STOP, and produce a recording on our own Oberlin Music label.

Joining them in Oberlin for an evening of internationally inflected jazz are an eclectic group of musicians representing five different countries and five generations. They have performed and toured with everyone from Yo Yo Ma’s “Silk Road” to Chick Corea, the Vanguard Orchestra,  John Abercrombie,  Sting, and Paul Simon, during just the past six months.

The program will be announced from the stage.

“For 30 years, Haddad has been regarded as a percussionist of fierce originality and brilliance…” – Daily News

Born in Cleveland, Ohio, Percussionist/Drummer Jamey Haddad holds a unique position in the world of jazz and contemporary music. Haddad’s musical voice transcends styles and trends, and the universal quality of his playing has attracted many international collaborations. Regarded as one of the foremost world music and jazz percussionists in the U.S., Haddad is Professor of Advanced Improvisation and Percussion at the Oberlin Conservatory of Music.

Haddad has been voted one of the top world percussionists across the globe by several entities, most recently by the September 2012 issue of DRUM! Magazine. Recent tours include the Fez Festival of World Sacred Music in the US and the Paul Winter Consort tour in Japan. Haddad collaborates regularly with Osvaldo Golijob, Yo-Yo Ma, Dawn Upshaw, Le Lovano, Elliot Goldenthal, Brazil’s Assad Brothers, Daniel Schnyder, Simon Shaheen, the Paul Winter Consort, Nancy Wilson, Dave Liebman, Esperanza Spalding, Maya Beiser, Trichy Sankaran, vocalist Betty Buckley, Steve Shehan, Leo Blanko, Nguyen Lee, and others. He has been a member of Paul Simon’s band since 2000.

In collaboration with the Cleveland Orchestra, Haddad curates and performs on their “Fridays @ 7” series, which combines a short classical program with an after-concert performance by a world-music ensemble chosen by Haddad.  This series has been embraced enthusiastically by audiences and musicians alike and has resulted in a significant increase of first-time attendees at Severance Hall Concerts.

Haddad has also contributed to Phoenix, Arizona’s renowned Musical Instrument Museum, which opened in 2010. He has aided with the acquisition of instruments from around the world for the geographical galleries and continues to consult with the museum on instrument curation and program development.

Haddad is the recipient of three National Endowment for the Arts Performance Grants, a Fulbright Fellowship and the Cleveland Arts Prize. He can be heard on more than 200 recordings and routinely has articles published internationally relating to the experiences of the contemporary world musician.