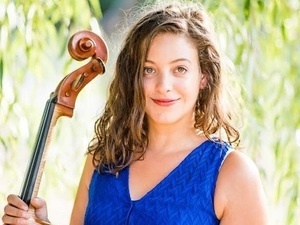 Prelude and Scherzando for cello and piano*         Ralph Shapey

Described by the Daily Forward as “an exuberantly gifted cellist,” Gwen Krosnick has played across the world as a joyous communicator and advocate of music. In her life as a chamber musician, educator, and concert presenter, Krosnick creates space for audiences to connect and react; champions serious contemporary music; and – through her thoughtful, adventurous programming – encourages a lively dialogue between great pieces of music, old and new. Krosnick’s 2016-2017 season includes an exciting mix of recitals (with pianist Lee Dionne), chamber music collaborations (including concerts in Vermont and Maine featuring Kneisel Hall faculty and alumni), debuting a new concert series (The Boston Beethoven Cycle) at home in Boston, and serving on the faculty at Oberlin Conservatory as Visiting Instructor of Cello.

Krosnick was the founding cellist of Trio Cleonice and performed with them across the United States, Europe, and Asia. A review in the group’s final year said of Krosnick: “Her playing is marked by a passionate temperament and a strong, rich sound, as well as a formidable technique. She acts the music with her expressive face and body; in fact, she becomes the music” (The Reading Eagle). In the trio’s eight seasons together, they appeared at venues such as Jordan Hall in Boston, the Kennedy Center in Washington, D.C., and the Concertgebouw in Amsterdam, and garnered top prizes at the Schoenfeld and Arriaga Chamber Music Competitions.

Alongside these performances, the group began a community chamber music series – Trio Cleonice & Friends, in its home base of Brookline, Massachusetts – of which Krosnick was Artistic Director. A Boston Globe review said that the series had the “informal charm of a house concert, the vast programming range of festivals like Yellow Barn, and playing that was, at its best, bracingly expressive”; Trill.me praised TC&F as “one of the most interesting and committed chamber series in Boston right now, exploring the repertoire from top to bottom, left to right, with an impressive roster of collaborators.” Along with curating these guest artists and programs, Krosnick performed extensively on the concerts, and received glowing praise in the Boston Globe for her artistry: “The concert’s lodestar was the cellist Gwen Krosnick…The younger Krosnick, who played gorgeously throughout, had a preponderance of the [Schubert] Quintet’s big melodies and looked as if there was no place she would rather be.”

Krosnick has premiered works written for her by Richard Wernick (two Suites for Unaccompanied Cello, his Piano Trio No. 2, and his two-cello work, Sonata for Two) and Ralph Shapey (Prelude and Scherzando for Cello and Piano). Advocacy for these pieces and for other new music – programming under-performed works, giving pre-concert talks, and commissioning new pieces involving the cello – is a constant for her, and a long-term goal. Krosnick’s mission to engage a wide audience in a passionate dialogue about music includes her frequent writing, both formal and informal, which appears online and in print publications. She is a regular contributor to Strings magazine and – in addition to introducing works from the stage, which she loves – writes program notes for concert series and for her own recitals. (A recent review described the way in which “her vivid, rhapsodic program notes enhanced the performance.”)

Krosnick studied at Oberlin College and Conservatory, where she received a Bachelor of Music Degree as a cello student of Darrett Adkins and Dmitry Kouzov in addition to a Bachelor of Arts degree in Russian Language and Literature. She most recently studied with Natasha Brofsky at the New England Conservatory, where she received a Master’s degree and coached with Vivian Weilerstein. Krosnick spent many summers at Kneisel Hall and Greenwood Music Camp; she was a longtime participant at Yellow Barn, where she collaborated with artists such as Anthony Marwood, Violaine Melançon, Maria Lambros, Alan Kay, and Donald Weilerstein. Krosnick’s central musical influence, since childhood, was the Juilliard String Quartet: her father, the cellist Joel Krosnick, as well as the quartet members whose playing she heard live growing up – Robert Mann, Joel Smirnoff, Ronald Copes, and Samuel Rhodes. Her other most impactful teachers included the great pianist Seymour Lipkin, violinists Laurie Smukler, Mark Sokol, and Geoff Nuttall, and music theorist Brian Alegant.

Away from the cello, Krosnick’s focus mimics her joyously-varied musical life: she is Mom to Anya, a wonderful Australian Shepherd rescue puppy; continues her Russian language studies; practices yoga, reiki, and meditation; and is a passionate and accomplished home cook – specializing in classic, mostly-vegetarian, intensely-flavorful Italian food.

Pianist Lee Dionne holds passion, imagination and play at the core of his artistry. Currently based in NYC, Lee enjoys an active career as both a soloist and chamber musician, performing frequently as a core member of Cantata Profana and with Ensemble Connect (formerly Ensemble ACJW, a joint program of Carnegie Hall, the Juilliard School, and the Weill Institute). Through this last organization as well as his own freelance work, Lee cultivates a particular interest in creating performances that help audiences form personally relevant connections with music. His experience here has ranged from presentations tying performance to analysis for audiences of musicologists — to short introductions of specific pieces for elementary school classrooms.

Lee has performed in venues throughout the US and around the world, including solo appearances in Weill Hall, the Concertgebouw in Amsterdam, and the Philharmonic in Bratislava. As a chamber musician, he has appeared at the Staunton Music Festival, Yellow Barn Music Festival, and Norfolk Summer Music. Lee’s performances have been broadcast live on NPR, Britain’s Classic FM, Holland’s Classic FM, and Portugal’s Antena 2, and he has made commercial recordings for MSR Records and Naxos.

Lee is currently a doctoral candidate of the Yale School of Music and a candidate for the soloist diploma from the Hochschule für Musik, Medien, und Theater in Hannover, Germany. He holds an MM and MMA in Piano Performance from the Yale School of Music and a BA in literature from Yale College. His major teachers and influences have been Boris Berman, Wei-Yi Yang, Matti Raekallio, Patricia Zander, Arthur Haas, Michael Friedmann, Paul Berry, and Wilma Machover.