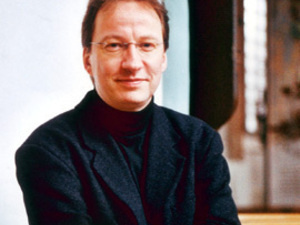 Born in Bremen, Germany, Arvid Gast studied organ performance and church music at the Hochschule für Musik und Theater in Hannover. From 1990-1993 he held the position of organist and choirmaster at St. Nikolai Church in Flensburg.

Appointed professor of organ performance at the Hochschule für Musik und Theater “Felix Mendelssohn Bartholdy” and university organist in Leipzig in 1993, he remained until 2004 when he accepted the position of director of the Church Music Institute at the Musikhochschule in Lübeck. In addition, Gast is titular organist of the historic organs (Stellwagen-Organ from 1637, Large Organ from 1466/1672/1984) in St. Jakobi Luebeck, and held the same position at the Concerthall “Kloster Unser Lieben Frauen” in Magdeburg from 2008 to 2014. In 2007 he founded the International Dieterich-Buxtehude-Organ-Competition Lübeck. He is currently serving as visiting professor of organ at Oberlin Conservatory of Music.

During his studies, Gast won numerous international organ competitions. He is frequently invited as a juror for many distinguished international competitions, including Leipzig, Graz, Alkmaar, Tokyo, Boston, and Moscow. His recordings, concert invitations, and interpretation courses at home and abroad attest to his abilities as an eminent recitalist and pedagogue.