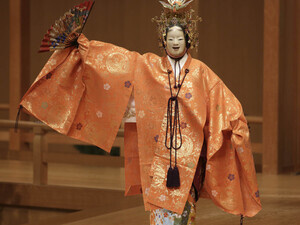 One of the first women to act as a lead performer in a traditional Noh lineage, Hisa Uzawa is a prominent member of the Tessenkai branch of the Kanze School of Noh theater in Tokyo.

She has been designated as a ‘‘Living Cultural Treasure’’ by the Japanese government. She and her daughter, Hikaru, will introduce the dynamics and techniques of the 650-year tradition that lies at the heart of the Noh theater.