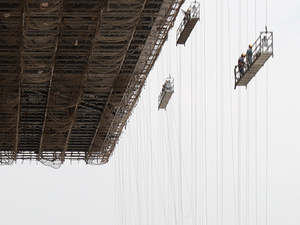 The lecture discusses a set of films that have been made by the American artist Zachary Formwalt on the site of three stock exchange buildings in the wake of the financial crisis of 2007: the Royal Exchange in London of 1845, the so-called Bourse of Berlage in Amsterdam of 1903 and the Shenzhen stock exchange designed by Rem Koolhaas in 2006.

The set of ‘Three Exchanges’ addresses a peculiar phenomenon of recent history: the “becoming-media of finance.” What is striking about theThree Exchanges is the manner in which the medium of film is not used as a mere support of an expository statement, but media technology is shown to be implemented within the ‘media system’ of financial capitalism.

Only a slight ‘ghosting’ around the edges, a momentary irruption of noise, reveals that the smooth, uninterrupted movement of surfaces in these films is itself an effect of fictitious capital. The apparatus of financial capitalism, to use an older term of film theory, ‘sutures’ us into a diegetic universe where the movement of capital is ‘abbreviated’ and money seems to beget more money in a seemingly autonomous movement of the stock market. It is this medial logic of ‘stitching’ whereby data that are sampled in a discrete and discontinuous manner are transformed into a homogenous and isotropic reality that the Three Exchanges continuously mimics and deconstructs before our very eyes.

Eric C.H. de Bruyn is assistant professor in the Faculteit der Geesteswetenschappen, Center for the Arts in Society, and Literatuurwetenschap at Leiden University.  He is a internationally recognized expert in the history of modern art and cinema, with a particular focus on technical media in art practices after 1945.

His recent publications include essays on the films of Richard Serra, Bruce Nauman and Robert Smithson (amongst many others), on Marcel Broodthaers ‘sSection Cinéma, and on the concept of topology in relation to Minimalism and Post-Minimalism.  He is an editor of Grey Room, a journal of art, architecture, media and politics published by MIT Press, where he also recently published the compelling essay, “Beyond the Line, or a Political Geometry of Contemporary Art.”  With Sven Lütticken, he is a founder of Séances, a curatorial and scholarly program of film sessions.  He was the curator of Film after Pop and Minimalism: Single and Double Screen Projections at the Centre Georges Pompidou (2011), and of Flashing into the Shadows: The Artist’s Film in America 1966-1976at the Whitney Museum of American Art, Tate Gallery, and Argos (2000-2003).

Free to the public