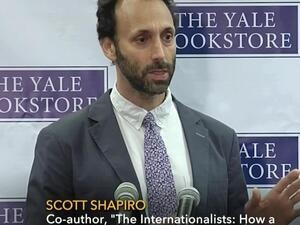 This event is part of the Global Issues Symposium 2019, which carries the theme of "Militarization of Global Politics, Economy & Society" and is organized by the International Studies Program.

This public lecture will be given by Scott Shapiro, professor of law and philosophy at Yale Law School.

"Vladimir Putin’s Russia has completed the first successful land grab in Europe since the close of World War II. China has built illegal artificial islands throughout the South China Sea. Meanwhile, Donald Trump has called into question continuing U.S. commitment to the WTO, NATO, NAFTA, and the United Nations.

The modern legal order is arguably at greater risk today than ever before. After WWII, “The Internationalists” shaped a new legal order maintaining that war was a barbaric way to resolve disputes. The modern rules and organizations they created would make possible the most peaceful seven decades since the state system first emerged. As the world stands on the brink of rejecting this international legal order, this is a moment to understand what is at stake."

Shapiro is the Charles F. Southmayd Professor of Law and Professor of Philosophy at Yale Law School. His areas of interest include jurisprudence, international law, constitutional law, criminal law and cybersecurity.

He is the author of Legality (2011), The Internationalists (2017) with Oona Hathaway, and editor of The Oxford Handbook of Jurisprudence and Philosophy of Law (2002) with Jules Coleman.

Shapiro earned BA and PhD degrees in philosophy from Columbia University and a JD from Yale Law School. He is an editor of Legal Theory and the Stanford Encyclopedia of Philosophy.

He is also the founder of the Documentary Film clinic, which provides legal services to independent documentary filmmakers. His next book, entitled Insecurity, details the history and technology of Internet hacking.