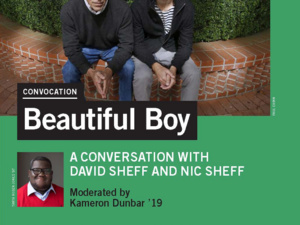 Nic Sheff was drunk for the first time at age 11. In the years that followed, he would smoke pot regularly, do cocaine adn ecstasy, and develop addictions to methamphetamines and heroin. Nic’s father, David Sheff, a renowned journalist who has written for the New York Times, Wired, Fortune and Rolling Stone, never gave up hope and helped his son battle and overcome his dangerous addictions.

Theirs is the story portrayed in the fall 2018 film Beautiful Boy, produced by Amazon Studios. The film was adapted from David Sheff's book of the same title and Nic's memoir, Tweak. David has since written Clean: Overcoming Addiction and Ending America's Greatest Tragedy  and is a vocal speaker and advocate for drug prevention and addiction treatment.

Nic, a writer for the Netflix series 13 Reasons Why and the AMC crime drama The Killing, travels the country speaking about substance abuse, mental health, bipolar disorder, and recovery. He has written three other books on those subjects.

A book signing will follow the convocation. The Oberlin Bookstore will have books for sale in the lobby; cash only.

Sponsored by the Office of the President and the Finney Lecture Committee.

Administrative, Office of the President