Convocation: An Evening with Radiolab 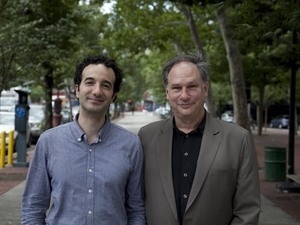 Jad Abumrad ’05 is the cohost of Radiolab. He's been called a “master of the radio craft” for his ability to combine cutting-edge sound design, cinematic storytelling, and a personal approach to complex topics from the stochasticity of tumor cells to the mathematics of morality. Abumrad studied creative writing and music composition at Oberlin College. He composes much of the music for Radiolab, and in the past has composed music for film, theater, and dance. In 2011, Radiolab received a Peabody Award, the highest honor in broadcasting. That same year, Abumrad  was named a MacArthur Fellow.

Cohost of NPR’s Radiolab, Robert Krulwich’s boundless curiosity and ability to explain complex subjects in compelling and entertaining ways has made him, as the New York Times said, “a storied figure in public radio history.” The Peabody Award-winning show won top honors from the National Academy of Sciences, Engineering and Medicine. Krulwich ’69 has appeared regularly on Nightline, ABC News Tonight, and Good Morning America. An Emmy winner for cultural history and investigative pieces, he also took home the 2010 Essay Prize from the Iowa Writers' Workshop.

The convocation is free and open to the public. Tickets are required.

Limited tickets available at the door.

For more information please contact the Office of Public Programs at (440) 775-6785 or visit  www.oberlin.edu/artsguide/convocation-series

Sponsored by the Office of the President and the Finney Lecture Committee.