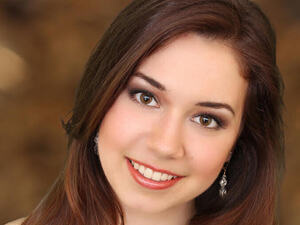 Elizabeth Ogonek: All streams reach the sea at last (2011)

Soprano Olivia Boen ’17 is currently in her third year of undergraduate studies at the Oberlin Conservatory of Music under the tutelage of Daune Mahy. As an opera singer, she has performed such roles as Norina in Donizetti’s Don Pasquale and Lauretta in Puccini’s Gianni Schicchi with Oberlin in Italy. Equally at home performing contemporary music, Boen has collaborated with composers Peter Kramer, Shihui Yin, and Pok Yee Ng. Recent performance highlights include concerts in the Tuscan cities of Siena, Cortona, and Arezzo through the Oberlin in Italy program. She has participated in master classes with such renowned artists as Renée Fleming, Eric Owens, Nicole Cabell, and Enza Ferrari. Boen has been selected from over one thousand applicants as one of Opera Theater of St. Louis’ Geradine Young Artists and will begin her work with the company in April 2016. As a Chicago native, Boen is especially excited to perform One Bright Morning in her hometown on the Conservatory’s 150th Anniversary Tour in January ​with the Contemporary Music Ensemble.

Cellist Darrett Adkins ’91 belongs to an exciting new generation of American musicians who are redefining the concert experience. His appetite for bridging established tradition and the avant-garde enables him to explore repertoire in almost every genre, from the classical canon to the contemporary frontier. Adkins gave the first New York performance of Luciano Berio’s Sequenza XIV, which he has since recorded for Naxos’ complete Sequenzas collection. Recent presentations of his Hypersuite, a hybrid program combining solo Bach works with new works inspired by them, have riveted both listeners and critics. The press has described Adkins’ performances as “stunning,” “intensely involving,” “heroic,” and “fiery”; his six-hour premiere performance of Morton Feldman’s monumental Quartet II with the Flux quartet was described by New Yorker music critic Alex Ross as “a disorienting, transfixing experience that repeatedly approached and touched the sublime.”

In demand as a chamber performer, Adkins performs regularly on prominent concert series. From 1997 until 2002, Adkins was a member of the Flux quartet, known for its dedication to cutting-edge music. He has appeared in major festivals including Oslo Chamber Music Festival, Ojai, Melbourne Festival, Aspen, and Tanglewood. Since 1998, Adkins has been a member of Zephyr, featuring flutist Lady Jeanne Galway and pianist Jonathan Feldman. The trio tours regularly in the U.S. and gave the world-premiere performance of Lowell Lieberman’s Trio for Flute, Cello, and Piano, Op. 83.

Adkins has recorded for the Mode, SONY/BMG, Naxos, RCA, Tzadik, Koch, MMC, Engine Company, and CRI labels. Combining passionate teaching with performing, Adkins is a faculty member of the Oberlin Conservatory of Music, the Juilliard School, and Aspen Music Festival. He has earned degrees from Oberlin, Rice University, and Juilliard. He is originally from Tacoma, Washington, and now lives in Westlake, Ohio, with his wife Ingrid and their four children.