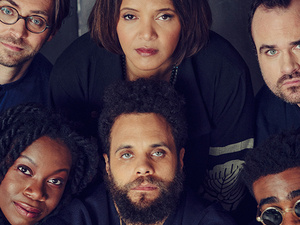 With technical wizardry and profound creativity, NEA Jazz Master Terri Lyne Carrington has become one of the giants of today’s jazz music. A three-time GRAMMY Award-winning drummer, composer, producer, and educator, Carrington began her professional career at only ten years old and received a full scholarship to Berklee College of Music at the age of 11. She is the first female artist to ever win the GRAMMY Award for Best Jazz Instrumental Album, which she received for her 2013 work, “Money Jungle: Provocative in Blue.” Over the four-decade-plus span of her career, she has played with Herbie Hancock, Wayne Shorter, Lester Bowie, Cassandra Wilson, Dianne Reeves, Stan Getz, Al Jarreau, John Scofield, Pharoah Sanders, and Esperanza Spalding among countless other jazz luminaries.

The Crimson Collective is excited to bring Carrington and her project Social Science to Oberlin for an inspiring concert in Finney Chapel on Friday, September 30 at 8 p.m. This event is free and open to the public.