Carolyn Laferrière: Music, Dance and the Cult of Pan and the Nymphs in the Vari Cave 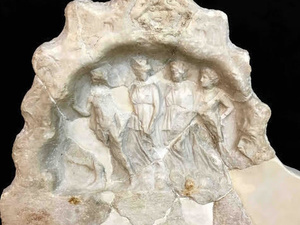 Religious ritual in ancient Greece regularly incorporated music, so much so that certain instruments or vocal genres frequently became associated with the religious veneration of specific gods, such as Apollo, Dionysos, and Kybele.

Carolyn Laferrière, a postdoctoral associate in Ancient and Premodern Cultures and Civilizations as well as a lecturer in the Department of the History of Art and Classics at Yale University, will present ‘‘Music, Dance and the Cult of Pan and the Nymphs in the Vari Cave.’’

Register for this event.

The rural, Attic cult of Pan and the Nymphs should also be included among this group: though little is often known about the specific practices in each individual cult, the literary and visual evidence associated with the cults make repeated reference to music performed on the pan-pipes—and to auditory and sensory stimuli more generally—as a prominent feature of these gods’ worship.

Taking the Vari Cave, sacred to Pan and the Nymphs, as my case study, I consider it together with the surviving marble votive reliefs from that space, in order to explore the sounds and sensations associated with the veneration of the rural gods.

I argue that the sensory experience offered by the cave and the images within it would have enhanced the worshipper’s experience of the ritual and the gods for whom they were performed. In this way, visual and auditory perceptions blurred together to create a powerful synaesthetic experience of the divine.

Laferrière also is the copresident of the Archaeological Institute of America (AIA) New Haven Society, a member of the AIA Societies Committee, and an AIA Lecturer for the 2019-2020 academic year.

The Archaeological Institute of America is the primary sponsor of this event.  A reception will follow.

marble sculpture in shape of crown with four figures cared inside.