But Never Should I Love 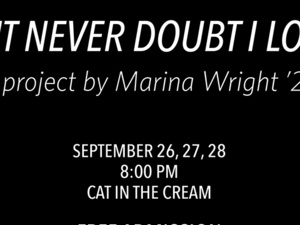 Using Shakespeare’s original text, translated German Art Song, and modern mediums, Marina Wright’s one-woman show, But Never Doubt I Love, reconsiders one of Shakespeare’s most famous characters: Hamlet. It begins with Wright, as Hamlet, in the middle of crisis: coping with the loss of his father, trying to comprehend his mother’s lack of faithfulness, and grappling with his uncle’s rise to the throne. Hamlet’s inner and outer worlds are in turmoil. Wright’s But Never Doubt I Love effectively investigates Hamlet’s mental state, exploring how both anxiety and depression affect him and his relationship to the women in his life.

Since her second year here at Oberlin, Wright has known that she wanted to create her own capstone. And, once inspired by “two, very different but equally wonderful, one-woman capstones” within the Theater Department, Wright decided she wanted to produce, direct, and perform a show that wholly demonstrated and “genuinely reflected” her and her performance style.
Performances will take place in The Cat in the Cream Coffeehouse, located inside Hales Annex Building at 180 West Lorain St, on September 26, 27, and 28 at 8 PM.
The performances are free and open to the public, with no tickets required. However, capacity is limited, so please arrive early to secure your seat.

Free and Open to the Public, No Ticket Required