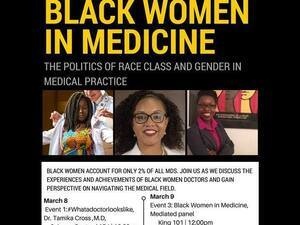 An event hosted by the Oberlin College Black Scientists Guild features guest speaker Dr. Tamkia Cross. She was involved in the infamous 2016 Delta Airline incident that sparked national discussions about the politics of race and gender in medical practice.

In #whatadoctorlookslike, Dr. Cross will speak on her experiences as the first of a series of events focused on the experiences of black women in the Medical field.

Tamika K. Cross, M.D. recently completed her residency in obstetrics and gynecology at the University of Texas Health Science Center in Houston (UT Health) where she served as an administrative chief resident. She has now joined as assistant professor at UT Health and is a practicing Board Eligible OBGYN in Pearland.

Dr. Cross has a passion for improving health outcomes for patients in underserved communities, and has dedicated much of her time to quality improvement for the Harris Health County Hospital System. She has received several awards during her training; “Excellence in Obstetrics”, “Excellence in Minimally Invasive Gynecologic Surgery”, “Outstanding Resident of the Year Award”, to name a few.

As a result of Dr. Cross’ ability to identify obstacles and implement change for discrimination faced by minorities in medicine, she was named Becker Hospital Review “Top 60 Most Powerful People in Healthcare in 2016”. She also received a UT Health Faculty Senate Resolution in addition to United States Congressional Recognition for her community service.

#whatadoctorlookslike is the first of a series of events focused on the experiences of black women in the Medical field. Black women account for only 2 percent of all MDs.

Join us as for a two-day event as we discuss the experiences and achievements of black women doctors and gain perspective on navigating the medical field.