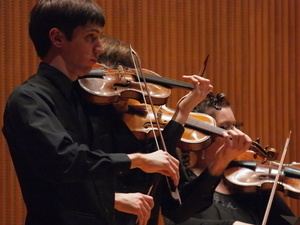 L’Apothéose de Lulli is a programmatic trio sonata in 31 movements for two violins and basso continuo (viol and harpsichord). It is dedicated respectively to the two great champions of the opposing French and Italian styles, Lully and Corelli. The two works by Charpentier that follow the Couperin feature the voice. Te Deum, H. 146 (a hymn of thanksgiving, probably dating from the early Middle Ages) is a motet for eight voices, chorus, and orchestra. This is his most famous setting of this text, made popular by the European Broadcasting Union as theme music for the Eurovision network. The 40-minute opera, Les Arts Florissants, H. 487, closes the concert. At the core of the work is the theme of Good versus Evil and it was written to praise King Louis XIV.