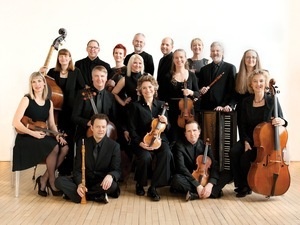 Based in Toronto, the renowned Tafelmusik Baroque Orchestra has seventeen permanent members, all of whom are specialists in historical performance practice.

Order tickets by calling Oberlin’s Central Ticket Service at 1-800-371-0178 or online at www.oberlin.edu/arseries.

J.S. Bach: The Circle of Creation

Tafelmusik, Canada’s award-winning orchestra on period instruments, has become an internationally recognized ensemble lauded by Gramophone Magazine as “one of the world’s top baroque orchestras.” Founded in 1979 by Kenneth Solway and Susan Graves, Tafelmusik Baroque Orchestra was under the inspired leadership of Music Director Jeanne Lamon from 1981 to 2014. She assumes the role of Chief Artistic Advisor during the search for her successor in the 2014/15 and 2015/16 seasons, and will work on developing the Tafelmusik International Baroque Academy (TIBA). Lamon will continue to perform with the orchestra for specific Toronto and touring programmes during the next two seasons, and will lead artistic planning until Tafelmusik’s new Music Director is appointed.

With its artist-focused mandate and commitment to excellence and innovation, Tafelmusik is known around the world for its creative, innovative new contexts for the performance of baroque and classical music.

At the heart of Tafelmusik Baroque Orchestra is a group of seventeen remarkably talented, enthusiastic, and dynamic permanent members, each of whom is a specialist in historical performance practice. Their collaboration results in a delightful transparency, vitality, and richness of sound, which has garnered acclaim around the world. The musicians participate on many levels, whether as core members, soloists, or contributors to the exceptionally creative programming ideas that bring Tafelmusik concerts to life and make them fully relevant in a 21st-century context.