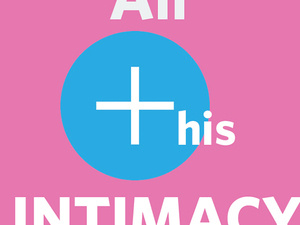 Ty Greene is a normal guy with three very big problems. In an unprecedented (for him) run of promiscuity, Ty has managed to impregnate three women in the span of one week: his ex-girlfriend, his 40-something, married next-door neighbor, and his 18-year-old student.

In this edgy comedy by playwright Rajiv Joseph, Ty’s problems illuminate every triumph and failure of his life, and as the women in his world converge and figure out what’s happened, Ty realizes that his life is adrift, and that he only has a limited time to try to piece it back together.

All This Intimacy, which according to the New York Times has ‘‘a certain can’t-look-away pull,’’ is a comedy about friendship and lust and how the two don’t mix.

All This Intimacy Poster Image of white letters on pink background.