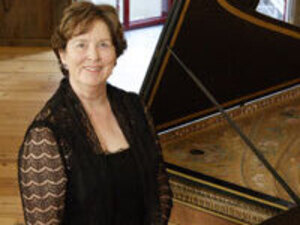 A tribute concert to Oberlin Trustee Karen Flint ’64, which will include performances by conservatory faculty and students from the Historical Performance Department.

Christopher Simpson: Divisions on a Ground in E Minor

Karen Flint ’64 teaches harpsichord at the University of Delaware and has been the artistic director of Brandywine Baroque, Delaware’s premier early-music ensemble, since its founding. Ms. Flint has performed at the Smithsonian Institution and with the Delaware Symphony Orchestra, Baltimore Chamber Orchestra, Newark Symphony Orchestra, and the UD Chamber Orchestra. With Brandywine Baroque she performs an annual series of concerts held in Exton, Pa. and Rehoboth Beach and Wilmington, Del. Her ensemble has made guest appearances at the Boston Early Music Festival, Winterthur Museum & Country Estate, UD concerts, and the Coastal Concerts series.

In 2003, Ms. Flint established the Dumont Concerts, a weekend festival in Delaware of harpsichord recitals on antique instruments featuring internationally known harpsichordists. She also founded her own recording label, Plectra Music, which specializes in recordings of Baroque repertoire performed on antique instruments. The label has undertaken a long-term series of discs titled Le Clavecin Français, an internationally acclaimed survey of 17th- and 18th-century French harpsichord music.

Other recordings include The Jane Austen Songbook with Julianne Baird and the forthcoming Complete Works for Harpsichord of Elizabeth Jacquet de La Guerre.

In October 2014, Flint returned to Oberlin to celebrate the dedication of a Gräbner-style harpsichord. Built by renowned craftsman John Phillips, it was commissioned and gifted to Oberlin by Flint and her husband Peter, with whom she collects rare and vintage keyboards. The exemplary reproduction has been called the finest harpsichord in Oberlin’s considerable collection.

The Flints are also committed to fostering the entrepreneurship of future conservatory students. They have created a permanent fund to support grants through Oberlin’s Creativity & Leadership Project. Flint Initiative Grants will be awarded each year for projects to be undertaken during winter term. These grants, previously known as Conservatory Initiative Grants Supporting Imagination and Excellence, have allowed students to arrange tours in Norway, pore over early music manuscripts in England, and teach at a community music school in India in recent years.