A Performance by San Jose Taiko 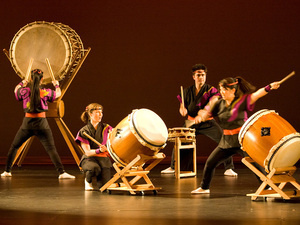 San Jose Taiko is acknowledged as one of the premier Taiko ensembles in the world. Taiko—the Japanese word for drums—has evolved in the United States to refer to the art form of kumidaiko, or ensemble drumming featuring Japanese instruments. It is a spirited and joyful art, known for its eclectic musicality and synchronized choreography.

In this 90-minute program, members of San Jose Taiko will combine performance with a presentation on Taiko’s history in the United States and its relation to the incarceration of Japanese Americans during World War II.

Founded in 1973, San Jose Taiko was only the third such group to form outside of Japan. Recognized today as a pioneer in contemporary Taiko, the group has taken on the mission of helping to spread the art form through performance and diverse educational programs. San Jose Taiko performs for more than 75,000 people per year, both nationally and internationally.

This performance is part of the month-long series of events organized in conjunction with the public history exhibit, Courage and Compassion: Our Shared Story of the Japanese American World War II Experience, in the Richard D. Baron ’64 Art Gallery, from February 17-March 18, 2018. Public viewing hours are from 10am to 5pm, Saturdays, and from 12-5pm, Sundays.