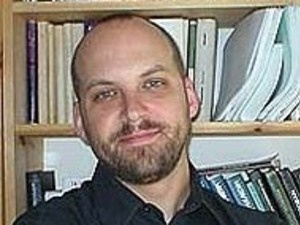 Each year for more than a decade, the Translation Symposium has been the intellectual and creative high point of the Oberlin academic year. It is a fast-paced, multilingual, transformative event that exposes the audience to 20 literary pieces from a dozen or more languages.

We are accepting submissions through Monday, March 21. Please send a brief original-language text (poetry or prose) with reference to source and your original translation into English to Jed Deppman and Kazim Ali.

The symposium will also feature a keynote lecture, "The Universal Translator" by Benjamin Paloff at 4:30 p.m., April 7 in Craig Lecture Hall.

Paloff is the author of two collections of poems, And His Orchestra (2015) and The Politics (2011), and of Lost in the Shadow of the Word (Space, Time, and Freedom in Interwar Eastern Europe), forthcoming from Northwestern University Press. A former poetry editor at Boston Review, his poems have appeared in A Public Space, The Paris Review, The New Republic, and elsewhere, and he has translated several books from Polish and Czech, including, most recently, Richard Weiner’s The Game for Real (2015). He has twice received grants from the National Endowment for the Arts—in poetry as well as translation—and has been a fellow of the US Fulbright Programs and the Stanford Humanities Center, among others. He teaches at the University of Michigan.

The symposium is made possible with the support of the Oberlin Center for Languages and Cultures, the English Department Flint Fund, and the Comparative Literature Program.